We’re finally coming into watermelon season! I had been cutting watermelon the hard way until about a year ago. I’d cut it into chunks with the rind on, and then struggle with a slippery knife and awkwardly shaped pieces, trying to get as much of the fruit out as possible, but still feeling like I was wasting a lot. There was no real rhyme or reason to what I was doing, it was a slow process, and I didn’t like doing it. But about a year ago, somewhere I picked up a different approach that is so much faster and more efficient. This is great news considering Wes loves watermelon, and we go through about one a week at our house during the summer!

You may have seen this method on a cooking show, as it is how most chefs cut most fruit. Don’t be afraid. At first it can appear intimidating, and it may take you one or two watermelons to get the hang of it, but pretty soon you’ll be zipping right through. You just need a large cutting board and a sharp butcher knife, and you’re set.

First, make sure you wash your watermelon. I know it seems weird since you don’t eat the rind, but when your knife goes through the rind, it can pull dirt and bacteria onto your fruit. Ok, now you are ready to start by cutting the watermelon in half. Since we are only a family of three, we only use one half at a time. If you want to cut both halves at once, then disregard the next step. If you’re only using half like me, cover the cut side of half you aren’t going to use with plastic wrap, place face down on a plate, and refrigerate until you are ready to use it. Mine usually last a week when I do this. (But heads up, when you go to use the second half that has been stored, you will want to cut off a very small layer of the part that has already been cut.)

Ok, now that you have half of a watermelon, lay it cut side down on your large cutting board. Take your sharp knife and insert it into the top of the rind – not the very top, but where the rind starts to curve down – and cut all of the way down the side of the watermelon. Like I said, it will take you a time or two to get used to how deep you need to cut. You will also need to curve your knife slightly to follow the curve of the melon. Now turn the fruit a slight bit and repeat another cut adjacent to where you just cut. At this point, you can see where the rind ends and the fruit begins, so you can tell where you will need to put your knife. And if you leave a little bit of the white part of the rind on the fruit, just shave it off. Repeat cutting strips of rind all the way around.

Now you should just have a green “cap” of sorts left on top of the melon. 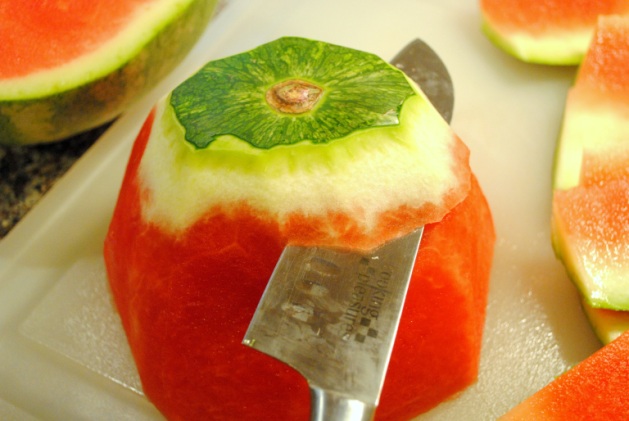 Take your knife and place it horizontally, parallel to your board, and slice off the cap. Remove any remaining white bits if you need to.

Then you can slice or chunk up the watermelon however you like! I like to make slices all of the way through, and then lay the slices down 2-3 piled up at a time and cut into squares. Then I put it in a big bowl and keep it in the fridge so we can snack on it all week long! 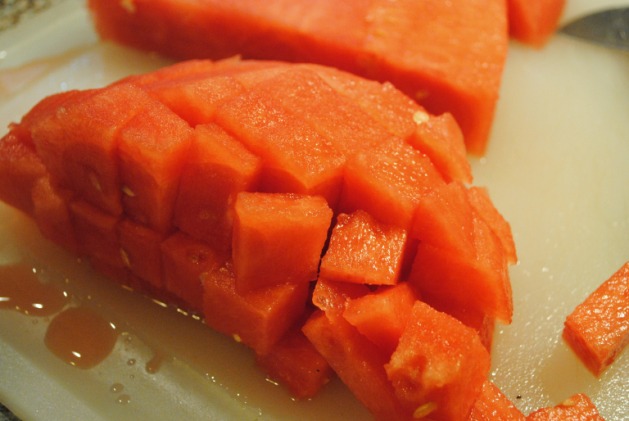 And then…if you want…you can make a cute little fruit train too. You know, if you happen to have a toddler who loves trains and fruit. 🙂